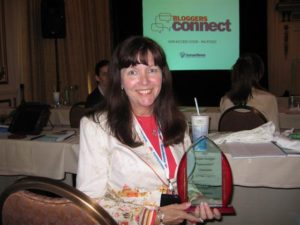 This site, popehandy.com, is part of a network of Silicon Valley real estate blogs, websites and online resources by Mary Pope-Handy, Realtor and prolific blogger.

This one began originally in late 1999 (for a chuckle, you can view a snapshot of the home page on the WayBackMachine site).  In 2000 it became an Intelitouch site (see 2004 version), and over the years I added quite a lot of custom content (see 2013 archive), which brought me web traffic and business.  Sadly, that platform was built on cold fusion and not updated, and eventually I had to migrate off to WordPress. So now this site has a blog feature too.

In 2006 I realized that blogging would probably be a great idea, since just rewriting the content on my website had worked to bring me business.  The first year I foundered a bit, but in 2007 I got into the nationwide Project Blogger contest, sponsored by Inman News and Active Rain, and together with my mentor, Frances Flynn Thorsen, won after a marathon writing and publishing effort with weekly critiques. There were many excellent blogs and authors against whom we were competing (and many of the other Realtors have remained my friend to this day).  Winners were able to assign the $5000 prize money to the charity of their choice, and we sent ours to CARE, which provided artichoke plants to a village to become a sustainable food source. 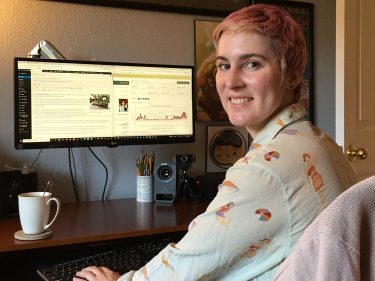 Clair at work on the blogs.

Since that time, I expanded my original effort from one blog – Live in Los Gatos blog – to a number of blogs.  It went from one town to larger areas (LG plus nearby areas, covering the county in my Valley of Heart’s Delight blog), all of Silicon Valley for folks thinking of or planning to relocate (Move2SiliconValley) and also smaller (my own Belwood neighborhood).  I learned that whatever I write about is what I get, so quit penning pieces on short sales and REOs!  I’ve had fun incorporating some video – even of myself, which is way out of my comfort zone – and of course plenty of photography.  It’s been a fun journey with the blogs, and I invite you to join me by reading along, suggesting articles, and jotting me a note if something strikes your fancy. (I’ve had to disable comments on all blogs as the ratio of spam to real comments was more than 1,000 to 1, sadly.)

In 2009 Clair Handy began contributing to the blogs. With a lifelong education in the local market, a curious mind, and a keen eye, she has penned articles on everything from market data and environmental hazards to special events and local history. Researching every new topic and studying the market became a passion, which became a career. Clair is now fully licensed and working with Mary both in and beyond the blogs.

popehandy.com/blog – this site’s blog, featuring neighborhood or community profiles across Silicon Valley, and many articles on selling homes in Silicon Valley

SanJoseRealEstateLosGatosHomes.com – Valley of Heart’s Delight blog, focused on Santa Clara County and the west side in particular.

Move2SiliconValley.com – a Relocation Resource with info on all of Silicon Valley, but especially Santa Clara County, San Mateo County, and Santa Cruz County (Alameda County is in another MLS, so awkward to include)

BelwoodOfLosGatos.com – a blog about my corner of Los Gatos, with 3 subdivisions as prominent: Belwood of Los Gatos, Belgatos, and Surmont + nearby areas in the east end of town.

ValleyOfHeartsDelight.com – a website currently hosted on Real Pro Systems.  This may eventually become wordpress also.  I’d like to eventually focus on local history on this site, as I treasure many elements of our agricultural past (and grew up playing in the orchards myself).

The Silicon Valley Real Estate Report – covering Santa Clara County, San Mateo County, and Santa Cruz County – this is not content that I create, but is generated for me by REReport.com, to which I have a subscription.  Each month, statistics on the housing market come out both for the counties and the cities, towns, and districts of some larger places like San Jose.  (I also have a subscription to Altos Research.  You cannot have too much data!)