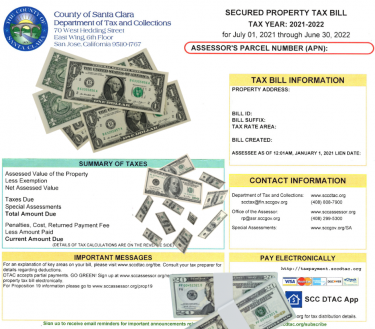 One of the more confusing elements for home buyers attempting to anticipate their closing costs is the property tax prorations, which are referenced in the purchase agreement or contract, but not explained. As most Silicon Valley real estate consumers know, home owners in California do pay property taxes. When a home is being sold, the sellers pay that tax up to the date of closing, and the buyers pay it from the date of closing on. Put another way, the property tax is prorated.

While that seems simple enough in theory, the ins and outs of it are not so straightforward due to the way the county collects the funds and how slowly the county’s system updates the amount owed after the change of ownership. It may be particularly confusing to first time home buyers, but all may be caught off guard.

The confusion is around these areas:

The county’s tax assessor’s office works off of a fiscal year that runs from July 1st to June 30th. The property tax bill is issued once a year, in the fall, based on the assessed value as of January 1st of that year. It may be paid twice, once in late fall (due Nov 1, delinquent after Dec 10), and once more a few months later, into the new year (due Feb. 1, delinquent after April 10th – not the 15th, the Federal Income Tax deadline to file and pay, which confuses people).

Please note the long lag time between when the property is assessed and when the real estate taxes may be due. Your home could be assessed on January 1 2022, but the second installment of the tax bill for that assessment is not required to be paid until April 10th 2023.  Now overlay the long lag time on top of home buying and selling in our pricey San Jose area with our equally high real estate taxes for new home owners and you begin to see where trouble may be brewing.

Whenever you close escrow, there will be a property tax amount due for the current installment which the home buyer needs to pay at the time of closing. If the seller has already paid that installment (which will be a lower rate than the new home buyer’s rate most years), the buyer must reimburse the seller for all the days after close of escrow for that billing period for which the seller has already paid. If someone closes escrow on June 28, it would be a very small amount, since the tax year begins again on July 1st. If it is at the beginning of the billing period, it would be larger. If it is early in the payment cycle, say, January 10th, and the bill has not yet been paid, there will be a more significant tax bill due to the county, of course, since it is more months being covered. Whether paying the county directly or reimbursing the seller, the payment for the current installment will be made in escrow and will be a part of the closing costs.

Now let’s get into the nuances of it.  If you, the Silicon Valley home buyer, are better prepared, you won’t face a financial surprise later.

As I mentioned, the rate that you as a home buyer pays at close of escrow is the seller’s current installment, which is based on a January 1st assessment of the property either the same year (1st installment) or the year before (2nd installment).  If the sellers bought their home 30 years ago, the tax rate charged at closing will be super low. If they bought it 1 year ago, it will be far higher. Either way, it is the old rate – not the buyer’s new rate.

Real property, or real estate, is reassessed when a house or condo is bought or sold.  The new property tax rate will be approximately 1.25% of the purchase price initially. After that, the assessed rate goes up a max of 2% per year. In other words, the property tax which will be due from the date of ownership forward will be based on the sale price, not the current seller’s tax bill.  However, at the time of closing, buyers are not charged their new or real rate. They are charged the seller’s rate, which is lower than the true new rate the buyer will owe. It’s not a gift that you pay less at closing – no such luck! The government will ask for the balance later (usually as soon as the buyer forgets about the taxes that will be due).

Supplemental taxes are sometimes called escaped taxes.  This is what will be due when the county catches up to what is truly owed. A few months after close of escrow, another tax bill comes, this time for supplemental taxes due.  The new home owner may already have paid the 2nd installment when the bill for supplemental property taxes arrives in the mail and find the bill very confusing. “How could I owe more? I paid in escrow AND I paid the next bill – early!”  But in fact this is money that the county should have collected upfront, were it more organized.  (We are in Silicon Valley. How can the county not automatically compute the tax due at closing and simply bill people correctly from the beginning? How complicated could that be?)

Also note that if you have an impound account for your mortgage and taxes, you may need to still pay the supplemental tax bill directly. Check with the holder of your impound account on how to handle that.

How to plan for the supplemental property tax bill

When reviewing closing costs for purchasing a new townhouse, condo, or single family home, the actual property tax rate is not covered – it is a hidden cost. It is not due right at closing, so it’s fair to only calculate what must be paid as of closing. But somewhere in the margins, it would be good to know the amount of the bill that will be coming in 3 to 6 months, before that money is spent on new curtains and furnishings for the home or some other worthy cause.  Home buyers can calculate this by making use of the county’s supplemental property tax calculator on the assessor’s website. Or ask the escrow officer to help compute the amount that will be due so there will be no surprise. Put it in your monthly calendar that “X amount” will be due until the bill comes and you’ve paid it.

If you are making use of an impound account, you’ll still need to pay the supplemental bill when it comes directly.

When are Silicon Valley property taxes due?

What are typical buyer closing costs in Silicon Valley? (on our main blog)