Is it the top of the real estate market in Silicon Valley?

The Silicon Valley region has seen a tremendous amount of appreciation in home values over the last 4 years.  For home owners who bought at the last peak, this means that they may have a good amount of equity again.  For home buyers who’ve been “watching the market” for two or more years, they have seen their buying power shrink. Perhaps they saw an amount similar to their whole down payment evaporate.   How much has waiting cost? Has waiting made buying now not so feasible? Is it too risky?

Let’s use the Cambrian area os San Jose for an example, though it is “hotter” than many areas in Santa Clara County (main reason has to do with excellent schools at a more reasonable price).

Have a look at the list and sale prices for these properties, on average:

In four years, that’s quite a jump – $350,000 or so in increased pricing for a home of about 1200 SF. Values today, a year later, are higher, too – most likely this typical home would be worth about $ 1 million if in somewhat updated condition in a decent location (not fully remodeled, not ideal location), so more like $450,000 gain in 4 years.

And that fact leads some buyers to say that we are “at the top of the market“.

The question: determining the “top of the market”

Are we at the peak of real estate prices for Silicon Valley?

No one knows the exact top or bottom of the market until it’s passed, whether it’s in real estate, stocks, or anything else. As the saying goes, “hindsight is 20 / 20”.

A correction will come sometime –  maybe this year, next year, or the year after, but I think probably not as much as 3 years into the future.

When the next correction comes, how bad will it be?

Just as we never know exactly when it will happen, we also never know how deep it will be.  But we do know that a correction is never uniformly painful or intense.  We saw this with the last one – Sunnyvale, Cupertino, and Mountain View (expensive areas near major employment regions) fared much better than Evergreen, Santa Teresa and remote areas which are more affordable and further out.  The less costly areas had far more foreclosures and short sales, and not only did prices roll back more (percentage)  in those sections of the valley, the recovery was slower in coming. In general, decade to decade, Palo Alto seems to be the last to fall and the first to rise during times of soft pricing or depreciation in home values in Silicon valley.  A lot of influence on the correction comes down to location.

What will cause a correction?  A few possibilities exist: home buyers just say no, and decide to either rent or buy further out (after all, gas is cheap right now), the stock market could collapse, a terroristic event could happen, a huge earthquake could devastate the region, or any number of things could de-stabilize home prices. Wait long enough and it could be rising bay waters.

DEMAND:  Just as likely, though, Apple, Google, and many other local mega-employers will keep hiring.  Native Californians will continue their exodus, but well paid newcomers from abroad will come in faster than the natives leave due to all that hiring in tech, so we’ll see continued population growth, aka “demand”.

SUPPLY: Some big employers, like Apple, will build homes to create more inventory, but it won’t be enough for everyone. Unless there’s a big change in tax law, seniors will be reluctant to sell their long-held houses, and that will keep inventory down.  Move up buyers faced with higher property taxes will be reluctant to move up – they made remodel or add on instead.   Supply is likely to stay tight for the foreseeable future, even if there is a correction, in my opinion.

CORRECTION IMPACT:  With our geographical constraits of the bay and two sets of mountains, and clogged roads going to the epicenter of tech, hoousing with good schools and short commutes will continue to be an enormous draw. This will be even more true when gas prices rise, as eventually they must.  These areas, such as Palo Alto, Los Altos, and Cupertino, will be impacted by a real estate correction, but not as much as places with long commutes and less attractive schools such as South San Jose, South County, and beyond.  That age old pattern is likely to repeat.

To return to our Cambrian example, this area is enormously popular now as it is a good value area for the price of homes and the quality of schools (the school scores have been rising dramatically over the last 25 years).  It’s likely to remain in demand for the same reason even in a downturn: the public schools present an enduring value.  A correction will certainly cut pricing there as everywhere – it will likely be worse than Cupertino but better than Blossom Valley, Willow Glen, and areas without such strong schools.

What happens if you buy at the top of the market? 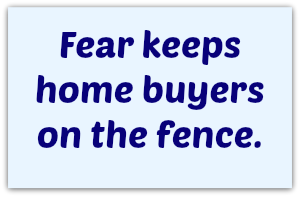 Fear is a great motivator to keep home buyers on the fence.  With all the appreciation we’ve seen, it is truly scary to consider buying a home if you think that prices will drop sometime soon.   Most people don’t believe that a price drop is imminent, but of course it does have to come sooner or later – it always does!

Does that mean you should not buy a Silicon Valley home?  I would say it depends on your long term plans.

If you think you will be leaving the area within 3 years, it’s probably not a good idea to buy a house even if prices are stable or appreciating a little.  The transactional costs are high and usually it takes about 5 years, in most markets, to make the purchase worthwhile.

Planning to be here five, ten years or more?  Buying in a good area probably makes sense, even if there’s a correction.  This I can tell you from personal experience.

In late summer 1989, as the Santa Clara County – San Jose real estate market was just coming down from the peak, Jim and I bought our first house.  It was a 3 bed, 2 bath, 1249 SF house in the Cambrian Gardens neighborhood.  It was mostly in original condition but the layout and location appealled to us, and we bought it for $225,000 (our interest rate was 10.25% and we paid two points to get such a good one!).  The market continued to slide for a few years, making us very uneasy and unhappy that had we waited a year, we’d have paid less.  However, we did love the house and enjoyed getting out of house hunting mode and getting on with our lives.  I don’t recall exactly how low the values for that home went (I wasn’t in real estate then) but I think about 10%.  By the mid 1990s values were up again.  We had been improving the house – new kitchen, new master bath, new roof.  I think we spent about $50,000 on the house.  We sold it in 1989 for $375,000 and were quite happy about the appreciation we realized in the sale.

In 2008, I wrote an article that is actually pretty relevant for the beginning of a correction (and we are NOT there)
Stressed Out Over Silicon Valley Home Values and Sinking Stocks? You Are Not Alone!  – have a look at the charts and you can see the basic trends for this same “sample” type of home of 1200 – 1300 SF – prices rose to a high of $690,000 in 2007  the Cambrian Gardens tract before falling. If someone bought that house in 2007 for $690,000, it would have been emotionally upsetting to know that it could have been purchased for less a year or two later.  But it’s not the end of the world – if our hypothetical buyer held onto that house for 8 hears, it would be worth $1 million today.  That’s actually a huge amount of appreciation for 8 years.  Lesson? Buy and Hold!

I can’t tell you that a correction won’t happen if you buy now.  I cannot advise you to wait, either – if you wait, home prices may go up and interest rates may go up too.  What I can do, though, is to suggest that if you buy, do so with the intention of staying put for the long haul and buy in a really good area that will have enduring value (think short commute, good schools, or both).  This strategy has served many home owners well, whether they bought at the top OR at the bottom of the market cycle.