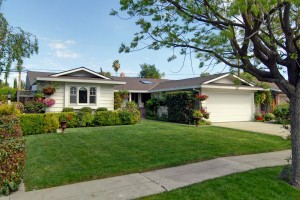 San Jose is a large, sprawling city with about 1 million people in an area that covers about  half of Santa Clara County. It’s the 10th largest city in the US and includes many diverse and distinct districts within its boundaries.

West San Jose is, as the name states, the westernmost point of the City of San Jose, located the area betweeen Saratoga, Cupertino, and Campbell.

Developed mostly in the 50s and 60s, this area is close to the foothills with plenty of shopping. Home to the Westgate Center, Santana Row, and nearby Westfield Valley Fair there’s shopping for everyone, and plenty of restaurants and nightlife. The historic Century Dome theatres are a landmark, as is their neighbor, the famous Winchester Mystery House.

For a break from the urban, West San Jose has a number of neighborhood parks and is only a few minutes’ drive from the Fremont Older Open Space Preserve and the Saratoga Country Club.

A Silicon Valley community, and with Santa Clara Valley Medical Center just outside this neighborhood, work isn’t far away. Access to a number of freeways and expressways makes commute easy.

West San Jose is served by a number of distinguished schools on the east side and the affluent Cupertino Union and Fremont Union school districts serving the western side.