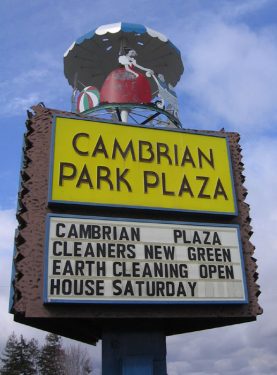 If quality education, affordability, and safety are on your check list, take a look at Cambrian. Alternatively known as Cambrian Park, or sometimes Cambrian Village, this is a highly desirable suburban district covering about four square miles nestled in quiet West San Jose.

The district’s name actually comes from the naming of the school, around the mid to late 1800s, and the schools remain a major draw to the area. Although all three school districts in Cambrian Park are very good, the Cambrian School District, Cambrian’s namesake, is most highly acclaimed. A number of schools throughout Cambrian Park sport Blue Ribbon or other awards, and some schools receive grants such as the Noyce Grant Program to support creative programs.

Housing ranges from affordable condos to luxury houses with views, and some communities share a cabaña with pools and swim teams. Most neighborhoods are “conforming” (all homes fairly similar to each other in size and age and style), but that doesn’t mean there aren’t scenic homes and neighborhoods. The foothills have beautiful views and old trees, and there are a number of neighborhoods with blocks of tree lined streets. Neighborhood parks, such as Houge Park, also make for a great ambiance.

The adjoining areas are good too.  Close to Los Gatos and a reasonable commute to downtown San Jose, Cambrian can enjoy San Jose’s professional hockey team (The Sharks), a symphony, art, ballet, and outdoors recreation, while also taking advantage of its own friendly atmosphere and extremely convenient shopping.

With Google expanding into downtown San Jose near Diridon Station, the 95118 area of Cambrian is set to see a strong interest in home buying as it’s close to Almaden Expressway, which makes short work of getting to downtown San Jose.

More reading on Cambrian:
Cambrian & Cambrian Park Neighborhoods: How to Choose Where to Live?

You can also view Cambrian listings on my interactive map tool

Some articles on Cambrian neighborhoods
(on my SanJoseRealEstateLosGatosHomes.com blog)

Below please find a live Altos Research chart, showing the median list price of homes for sale – this will give you an idea of what a house might cost there.

Use the map below to see what’s for sale in this area of Santa Clara County.

How’s the real estate market in Cambrian Park? Find out on my ReReport page.

Interested in other nearby communities in Santa Clara County? Check out adjacent Campbell. It features a vibrant downtown area, loads of parks and shopping, light rail, and more.