With a population of more than one million people, San Jose is the 10th largest city in the nation and the 3rd largest in California (behind Los Angeles, with about 4 million residents, and San Diego, which has approximately 1.5 million). Originally named for the Pueblo de San Jose de Guadalupe in 1777, San Jose was the first civil settlement in California and the first state capital. It was also the first major city with a woman mayor. San Jose dubbed itself the capital of Silicon Valley, and it is, in fact, the largest city in the region now known as Silicon Valley. San Francisco is an hour away and is near Silicon Valley, but not part of it. That said, what is now considered to be Silicon Valley has been creeping and changing, so perhaps in the future The City and The Valley will merge.

San Jose is a sprawling, mostly suburban city with a number of districts which are all quite distinct. The upscale Silver Creek Valley community is in the Evergreen District in Southeast San Jose. West San Jose borders Cupertino and Campbell and is known for its short commute to places such as Apple. Willow Glen is close to downtown San Jose and exudes a charm from yesteryear, with far fewer tract homes than most of Santa Clara County.   Cambrian (Cambrian Park) and Almaden are highly regarded for their good schools. Berryessa enjoys beautiful hillside vistas and a close proximity to the high tech centers in North San Jose such as Cisco. Alviso sits at the bottom of the San Francisco Bay and was its own city, separate from San Jose, until a few decades ago. There are many other districts or regions in San Jose.  Have a quick look at the map below. 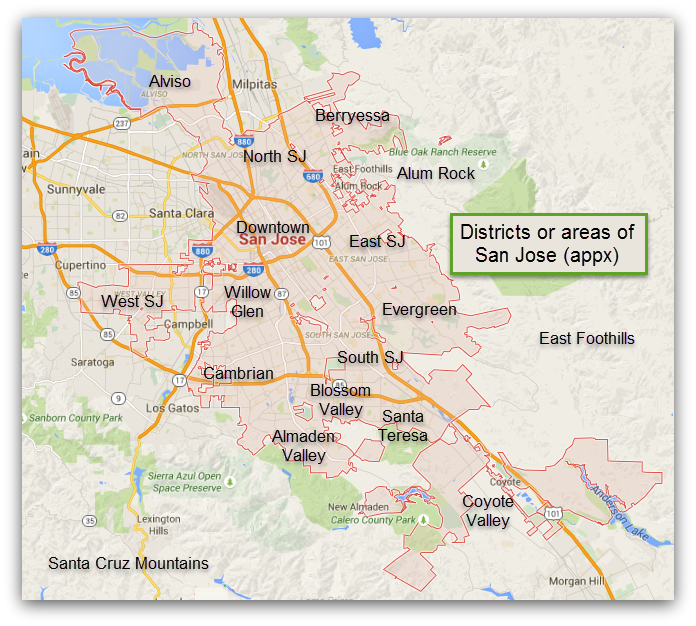 All of that said – how is the city as a whole doing?

Below please find a live Altos Research profile for the city of San Jose as a whole, updated weekly. And here’s a chart from Altos with the median price quartiles displayed.

Homes for sale in San Jose