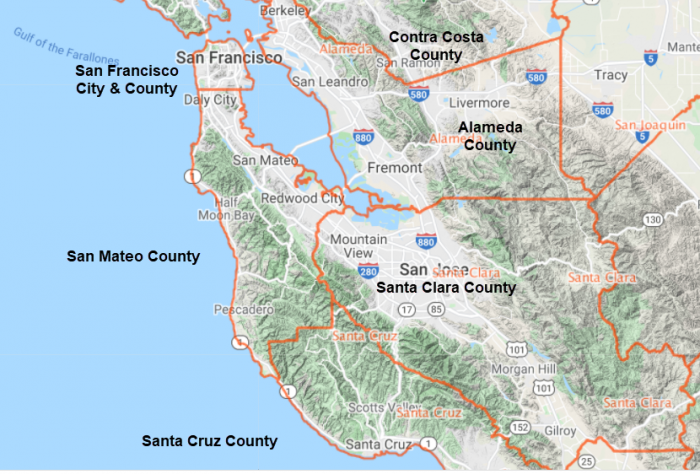 San Mateo County sits between Santa Clara County to the south and San Francisco to the north, with the San Francisco Bay to the east and the Pacific Ocean to the west. The coastal mountain range runs between the bodies of water and further south toward Santa Cruz County.

This is a county with close proximity to San Francisco (called “The City” by locals) and also to the South Bay. It is a diverse region which is highly sought after.

The coastal beach communities of Half Moon Bay, Pescadero, Pacifica, San Gregario and others have no small amount of fog. (Pacifica has a “Fog Festival” each year.)  It’s not surprising to see that much of this region is agricultural. (Half Moon Bay features a huge “Pumpkin Festival” annually.)

The mountain range areas enjoy gorgeous redwoods – they thrive on the fog and often beautiful views of the ocean, the Peninsula and Bay, and possibly both if one is right at the crest and the trees don’t block the view.
The more densely populated areas near the bay provide mild, Mediterranean weather. As you get closer to San Francisco it does get colder and foggier and windier as compared to Menlo Park, which lies adjacent to Palo Alto and Santa Clara County.

To see the San Mateo County real estate market report, visit my RE Report site using the link. From there you can click on the towns or cities within San Mateo County, or change to Santa Clara or Santa Cruz County.

Please read up on each of these distinct areas in San Mateo County:

In terms of the areas I work in San Mateo County, most of my service area is Santa Clara County, but I have sold in Menlo Park, Foster City, Redwood Shores, and San Mateo. I would not go as far as Half Moon Bay or Pacifica – just too far. The coastal areas have microclimates and you’d be best served working with someone closer to those areas who knows them better than I do.