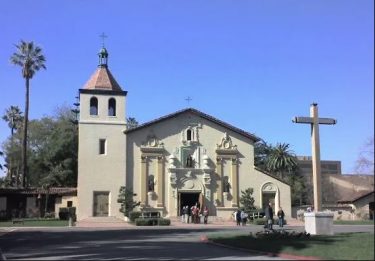 The heart of Silicon Valley, Santa Clara,  has much to offer. Housing the Mission Santa Clara, Santa Clara University, Mission College, Triton Museum of Art, the Great America Theme Park, the new Levi Stadium, the Santa Clara Convention Center, and over 31 parks and playgrounds, Santa Clara has something for everyone.

A recent ranking of 100 best places to live in the US in 2015 placed Santa Clara as # 7 for the whole country.  (I doubt that they factored in the cost of housing, but that’s another issue!)

The local swim teams are known for turning out Olympic level swimmers, and the Santa Clara International Swim Center is a hub of the sport. There are many restaurants and shopping centers within Santa Clara, and San Jose’s Valley Fair and Santana Row are nearby. Another big draw are the numerous high-tech employers within the city, such as Texas Instruments, and the short commute to others within the bay area. Freeways, parkways, lightrail, and CalTrain make it a zip to get anywhere around the bay, and nearby San Jose International Airport makes it quick to get out. Schools generally do OK in Santa Clara (though it is fair to say that people do not usually move there for the schools), and some areas are within the highly regarded Cupertino School District. Parents are supportive of the arts in schools and work to maintain their programs.  Well-established and nicely maintained, the heart of Silicon Valley remains a popular choice.

Neighborhoods and home styles do vary quite a bit, though the vast majority of houses are ranch style homes built between the 1950s and the 1980s.  Near the old

Homes range from lovingly maintained pre-WWII era to pedestrian-friendly neighborhoods of new construction, though many homes are from the 60s and 70s. I grew up in the University Square neighborhood which is close to Santa Clara University (street names include College, Alviso, Poplar, Circle, Hilmar, and Camino).  This area was built out in the mid to late 50s.

San Tomas Woods is situated by the Pruneridge Golf Course and can be found just off San Tomas Expressway and Pruneridge Avenue (streets all have tree names: Tanoak, Maplewood, Tuliptree, Birchtree, and Lindentree).  These houses were constructed in the mid 1970s.

In northern Santa Clara, you will find the Rivermark area which is extremely new by local standards and includes quite a bit of shopping and dining.  The downside: it’s so new and the strip mall is so conforming that it’s sort of an “anywhere USA” feel.  That’s the risk with some of the newer construction, but for people who want a shorter commute and youngr homes, this is a place to see.

Below please find a live Altos Research chart, showing the median list price of homes for sale – this will give you an  idea of what a house might cost there.

Homes for sale in Santa Clara