Once a logging town known as Bank Mills, and later known for its orchards and vineyards, Saratoga, CA, is now an upscale suburb of Silicon Valley and San Jose with a very high quality of life. Saratoga schools are top performing, the downtown is charming, the scenic beauty from the nearby coastal range cannot be missed, and the arts are prominent. The most upscale and the most rural areas are just a stone’s throw apart, and that is part of what makes this area so compelling. 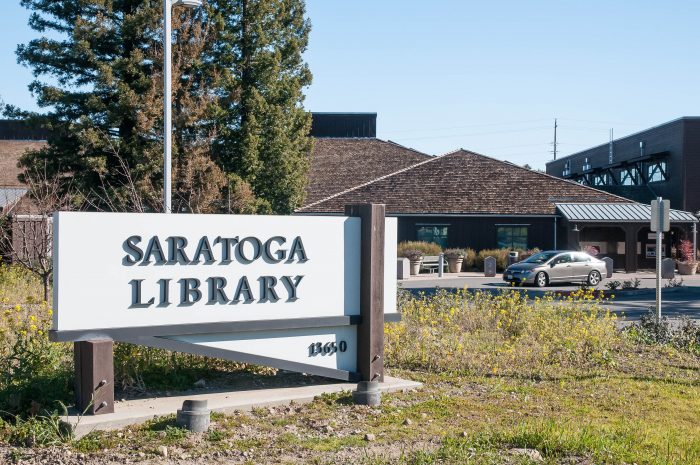 Saratoga’s library at the corner of Saratoga and Fruitvale Avenues, adjacent to the historic orchard park, is part of the Santa Clara County Library District and was greatly expanded and remodeled in 2003.

Where is the city of Saratoga? This is a “west valley” community in Santa Clara County. You’ll find it just north of Los Gatos and Monte Sereno along Highway 9, and just south of Cupertino, and like them, it sits at the foothills of the Santa Cruz Mountains and provides a path to the coast via scenic Highway 9 (Big Basin Way). I created a map using Google My Maps where you can locate some of the landmarks of Saratoga, CA. 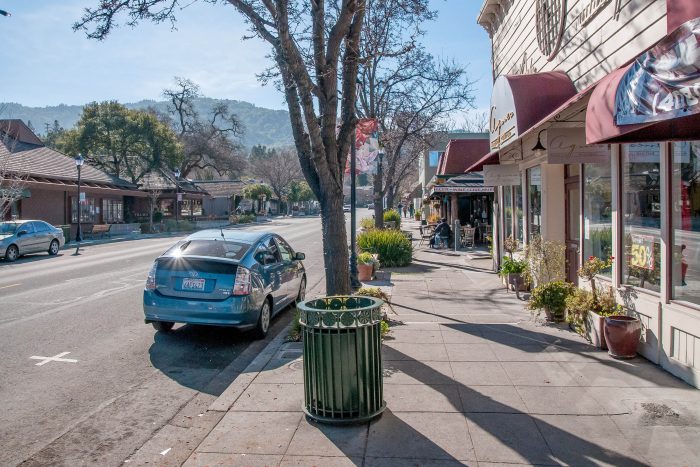 Downtown Saratoga, CA, known as “Saratoga Village” or simply “the Village” is an active strip along Big Basin Way with shops, boutiques, restaurants, spas, and wine tasting bars. Just off this main drag you’ll also find the lovely Wildwood Park. It is less busy at night than Los Gatos, so those who prefer things a little quieter will love it here. 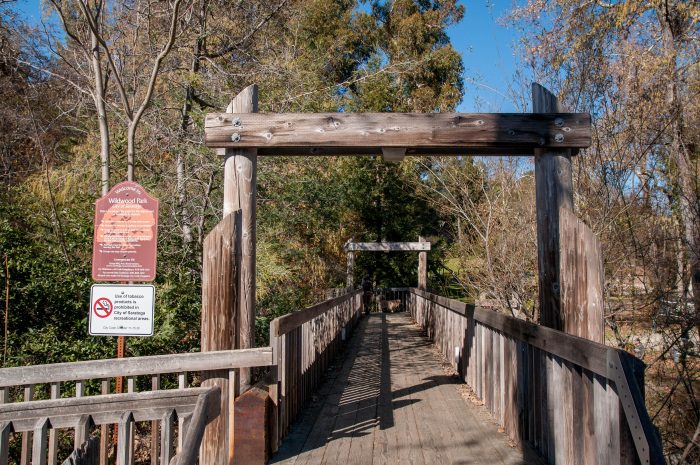 There are plenty of events and entertainment to keep you busy with venues such as Villa Montalvo, the Mountain Winery, the Hakone historic estate and gardens, West Valley College, vineyards and horseback riding all within town limits. 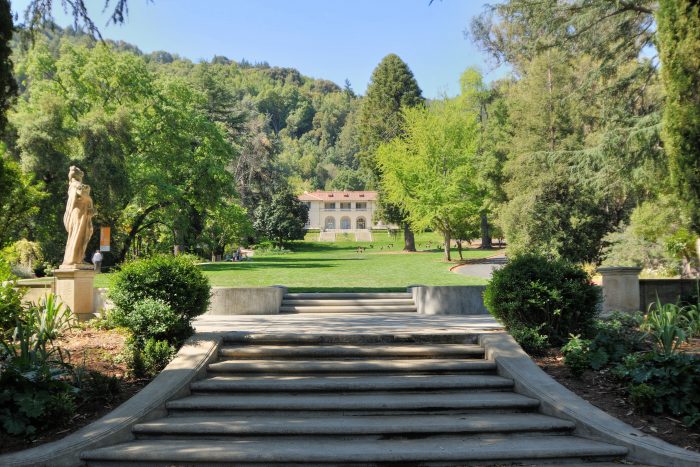 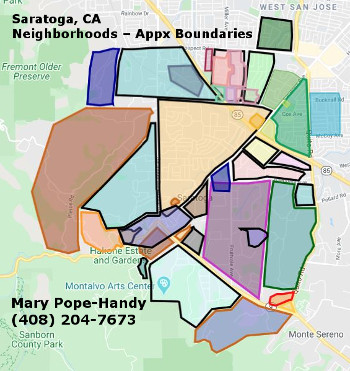 Neighborhoods often boast meandering roads, no streetlights, and views of the hills giving Saratoga its signature rustic feel. There are some older, historic areas known as Heritage Lane (Austin Way still has a brick road!) with interesting architecture.  Like the rest of Santa Clara County, most of this lovely city has more contemporary and ranch style houses.

In most cases, the smallest lots are around 10,000 square feet, and the most modest homes as small as 1000 or 1200 square feet, generally, with values beginning at around $1 million for a smaller house that needs a whole lot of work (consider the Paseo and Quito Village areas or nearby for “entry level” houses, or any of the many condominium or townhouse communities for more affordable options). The most expensive homes are truly luxury estates, worth many millions of dollars and usually sitting on multiple acres, frequently with views and in hilly locations west of Highway 9.

Some of the neighborhoods are described on another page on this site:
Saratoga Real Estate And Saratoga Homes For Sale

Some of the neighborhood or area names you’ll want to know include these:

Generally speaking, homes west of Highway 9 or west of Saratoga-Sunnyvale will be more expensive than those in the Golden Triangle – but not always. 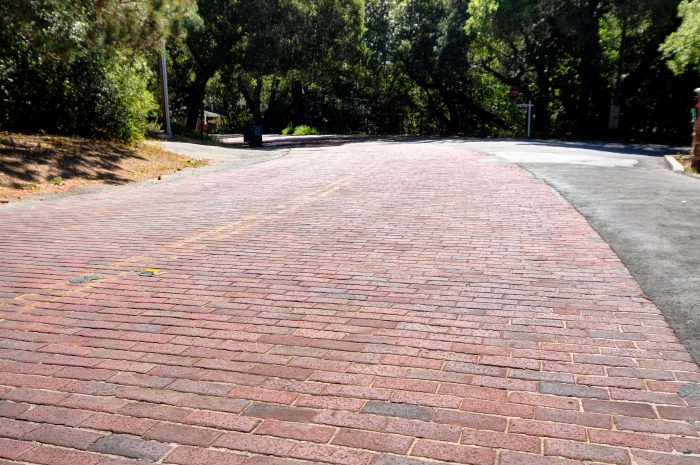 Beyond home buying, Saratoga is a good place to retire, too: the Saratoga Retirement Community is a large campus with independent living, assisted living, and nursing care available in an extremely scenic setting. 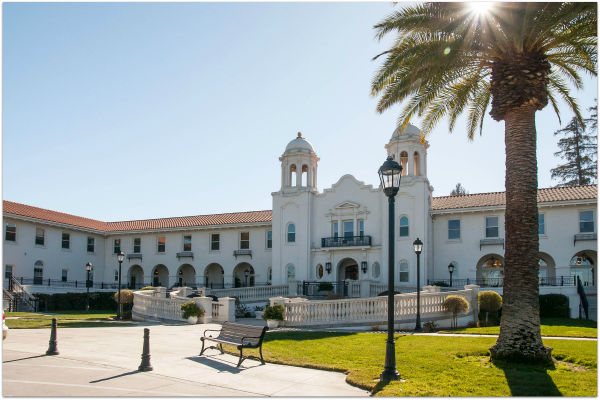 For some, this pretty city also includes the last real estate they will ever need – the beautiful and historic Madronia Cemetery. 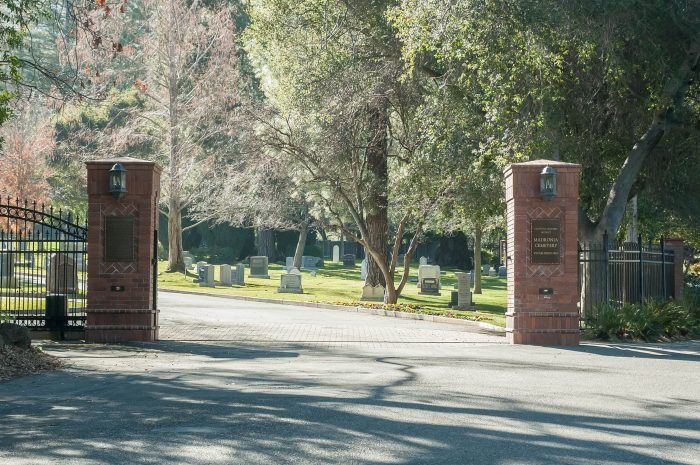 Saratoga is well known for its low crime rate and top notch schools. If this is what interests you, make sure you know where the school district boundaries lie. Areas are not so clear cut, and Saratoga includes four different elementary and three different high school districts.

Whether you’re stopping in for dinner and a concert, popping in for a horseback ride, or staying for the schools, this rustic, lively town is a great place to wind down and get busy enjoying life.

I’ve also written about Saratoga on another of my sites and you can read more at this link: Saratoga: A Secluded, Classy Corner of Silicon Valley

The Saratoga, CA, housing market and real estate listings of homes for sale

On another of my blogs, I’ve analyzed the Saratoga real estate market by price point and high school district. Please click on the link for that – it is periodically updated, so you get an idea of home prices in each of the three high school districts which serve this city. (Long story short: homes in the Campbell Union High School District are usually the most affordable.) Below please find a live Altos Research chart, showing the median list price of homes for sale now and in the fairly recent past – this will give you an  idea of what a house might cost there.

Visit my ReReport page for Saratoga.  Interested in the condominium and townhouse market? Just change the tab on the report to see that market – or to anywhere else in Santa Clara County, San Mateo County, or Santa Cruz County.

Personal note: though I live in Los Gatos, I grew up in Saratoga, living in three different neighborhoods there and graduating from Saratoga High School in 1977. This is a beautiful city and community.  If you are looking for a Saratoga Realtor, someone who’s knowledgeable about the community, to assist you in selling or buying a home there, please call or email me.  I’d welcome the opportunity to meet with you and see if we might be able to work together.