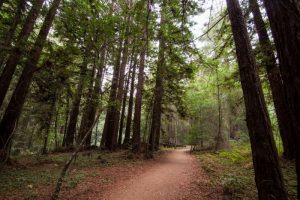 Scotts Valley sits nestled at the base of the coastal range, North of the Monterey Bay within Santa Cruz County. For those working just on the other side of “the hill”, such as Netflix in Los Gatos, this is a fairly quick commute. Home prices are a bit easier on the budget, so Scotts Valley real estate has a strong appeal. From much of Scotts Valley, it’s a quick drive to urban areas, such as Santa Cruz and Capitola for shopping, medical offices, fine dining, etc. Nonetheless, there’s plenty of appeal for visitors and residents within Scotts Valley, as well.

First off, let me address that the real estate market in the mountains is distinctly different than in the Santa Clara Valley or the more urban areas of Santa Cruz County. You’re more likely to run into private roads, septic systems, and certainly more wildlife. High altitude homes in the Santa Cruz Mountains occasionally get drifts of snow, even! Buildings on hillsides also have common structural concerns which homeowners and buyers should be aware of and learn to look for. Many of these have to do with water and the area’s high-clay-content soil. A while back I wrote a post specifically on this subject: What To Consider When Buying a Hillside Home in Silicon Valley.

As I am writing this post, January 23, 2020, there are a dozen residential properties currently on the market: 1 condo, 4 single family homes, and 7 townhomes. Three of these townhomes are part of a brand new subdivision that is being sold by the developer and another 2 townhomes appear to be for another community that is under construction and is accepting reservations. Only one of the townhomes listed is not brand new construction! These townhomes are listed from a low of $850K to a high just shy of $1M. The four SFH on the market have a much greater range. Their ages range from 31 – 71 years old, lot size from 17,642SF to a whopping 174.45 acres, and list price from $588K – $2.599M!

Within the last 30 days, 4 single family homes have sold in Scotts Valley. Of these four homes, two sold between $850K – $900K and two sold between $1.1M – $1.3M. So, for buyers, you can certainly find a 3 bed 2 bath house in Scotts Valley for under $1M in the current market, which is nearly impossible in the valley right now! Explore more detailed analysis, data, and charts for the Scotts Valley real estate market on my ReReport page.

Scotts Valley has it’s own public school system, so you don’t have to go far to get to the elementary, middle, or high school. It’s a short drive to Santa Cruz, only about 10 minutes, or 15 during rush hour! Driving into downtown Los Gatos takes around 25 minutes without traffic, though rush hour can bring it closer to 40. For long-distance commuters, Scotts Valley has a bus which travels straight to Diridon station in San Jose. The city enjoys plenty of shopping and dining, has its own medical offices, and fantastic public parks.

Today, the city is named after Hiram Daniel Scott, who purchased the valley in 1850. His legacy is the Scott’s House, a 1853 Greek revival house that Scott built on his property and a historic landmark. When Mr. Scott lived here, the valley relied heavily on lumber, grain, and leather industries.

Agriculture continued to be a strong industry in Scotts Valley for over a century. In fact, Alfred Hitchcock purchased a vineyard retreat home here in 1940. Today that estate is Heart O’ The Mountain, which continues to produce limited quantities of Pinot Noir wine annually.

In the 20th century, tourism became a growing industry for the valley as old stagecoach stops began to cater to automotive tourists. In fact, a number of the famous trees of Gilroy Gardens originally grew in Scotts Valley where they were created and displayed for decades. Established locals might remember the Barn, an unassuming old building that became a hippie mainstay and played some of the hottest musicians in the 1960s. However it was Santa’s Village, a Christmas themed theme park, that was probably Scotts Valley’s biggest tourist draw for the two decades it existed. While the trees have been moved, the Barn taken down, and Santa’s Village is now newly constructed housing, some classic tourist spots remain in the neighboring areas. If you’re driving by Scotts Valley, consider a stop at the Mystery Spot or Roaring Camp Railroads.

Scotts Valley is certainly a city surrounded by natural beauty, and one which seems perfectly designed to go out and enjoy it. Weekly and annual activities, such as the Farmers Market and the Beer and Wine Festival are enjoyed by an active community of locals. Nearby are a selection of excellent parks and open space, including the Henry Cowell Redwoods State Park and Quail Hollow Ranch County Park. City has its own exceptional parks include Lodato Park, Sky Park, which holds the 4th of July firework show and the Skypark Dog Park, and Siltanen Community Park, home to Scotts Valley Little League and the Siltanen Family Swim Center. (On a side note, Sky Park was once Scotts Valley’s airport, and the airport President G. H. W. Bush landed in Marine One during his inspection of Santa Cruz following the 1989 quake.)

The city has a rich and interesting history, and while locals may be nostalgic about the past, the development over the last 50 years has greatly improved the area. Though the valley is still surrounded by wineries, redwoods, and horse ranches, Scotts Valley is now less of a rural agricultural community and is becoming a hideaway for commuters who want to enjoy the redwoods. Scotts Valley is a great community with appeal and entertainment all its own.