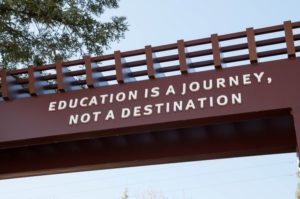 From one of the Silicon Valley schools: West Valley Community College in Saratoga, CA – “Education is a journey, not a destination”

Silicon Valley schools (public schools) are managed under the umbrella of the individual counties. In Santa Clara County, that would be the Santa Clara County Office of Education, for example. These Silicon Valley schools cover grades kindergarten through 12th (end of high school), generally.  Community colleges and state universities have a different jurisdiction.  Also, private elementary, middle, and high schools are not found on these websites.

Within each of these county websites, you can navigate to the particular school district’s site. There you can usually find the attendance areas of various schools and a lot of other valuable information.

If you are new to the area and don’t know what county you’re in, let alone which school district, two helpful sites (which seem to be correct about 99% of the time) are GreatSchools.org and SchoolAndHousing.com. At either of those websites you can input any Silicon Valley address and get the local elementary, middle and high schools assigned to that address, as well as view ratings and reviews (GreatSchools) and historic testing (SchoolAndHousing). Of course there are limitations and sometimes the boundaries between schools are not easy to follow, so be sure to always double check the assigned school with the actual district’s office or website.

One other thing to note is that not every school district operates the same way in terms of the school of attendance. The city of Saratoga has one school district, Saratoga Union School District, which has open areas of attendance. You are not automatically assigned to any particular school in that district, but may go to any where there’s an opening if you like. This can be a great alternative in many cases.  Do watch for that.

What about private Silicon Valley schools?

It can be hard to find a great list of private day schools covering all of Silicon Valley. Often it helps to begin with what type of school you have in mind. If you have it narrowed, you can do a web search by that type of school.

There are many private school systems in place here, whether secular or religious, following a particular educational philosophy such as Montessori or Waldorf, or based around a bilingual curriculum.

There are a lot of Catholic schools, for instance, but within that group, there are some with a particular and unique approach. Among the Catholic high schools, some are co-ed and some are single sex.

Here you will also find religious schools which are Lutheran, Episcopalian, Jewish, and I am sure many other religions.

Naturally many of the public schools are secular: Harker (3 campuses in Santa Clara County with grades k – 12), Stratford, and Challenger are the top three which come to mind for me.

Here’s a site with a list of what seems to be all the private schools for Santa Clara County. These are presented in alphabetical order, and as of the writing of this article (Aug 2016) there are 172 schools named.  Here’s the similar list or private schools in San Mateo County. Just “google” the question of private schools by county and you will find a wealth of resources.

Many families in the Bay Area or Central Coast (Santa Cruz area) elect to home school their children.  There are agencies that provide guidelines and curriculum.  I do not have any information on this but hope to add it in the future.

Finally, it should be noted that there are many schools throughout the region which do not offer the full curriculum, but are after school enrichment programs for language, religion, culture, art, dance, and many other things.