Stanford real estate is among the priciest in Silicon Valley. With a world class university and equally well renowned hospital on site, there’s no shortage of demand for housing of every kind.

Technically, Stanford, CA is a census-designated place, an unincorporated area of Santa Clara County. That means it is not part of any city or town. It’s hard to map this area because the boundaries are so disjointed. Segments of Palo Alto and Menlo Park are dappled in and around Stanford. The zip code 94305 appears to be almost exclusive to Stanford, with one or two exceptions in Palo Alto in this zip code (though these parcels are Stanford University owned land). On the local MLS, Stanford is area 243.

The university takes up a large portion of Stanford. Most of the area contained within the Campus Drive loop is within Stanford, though part are the 94305 Palo Alto area I mentioned before. Another large part of the Stanford area is open land. The grassy hills are home to the Stanford Dish, hiking trails, an observatory, and a respite for native species. Lastly, the residential neighborhood sits on the lower part of these foothills with winding tree-lined streets. The residential areas (not including student housing), are roughly contained within the area between Junipero Serra Blvd, Page Mill Rd, Bowdoin St, and the southeastern stretch of Campus Drive.

What kind of housing is in Stanford’s residential neighborhood? There are two condominium complexes with 218 units total: the Pearce Mitchell Houses (built 1975) and Peter Coutts Hill (built 1982). There are two duplexes (1900 and 1940) and one multi-family property (less than 10 units, built 1940). The largest portion of residences are 646 single family residences (built from approximately 1917 – 2018). Subdivisions include Ryan Court Homes, Frenchmans Hill, Pine Hill, Cypress Hill, San Juan, and Cooksey. Lastly, while this wouldn’t usually make my list, I think it should be mentioned that there are 15 Fraternity / Sorority Houses in Stanford, mostly within a single stretch of Mayfield Ave where the neighborhood borders the university campus. 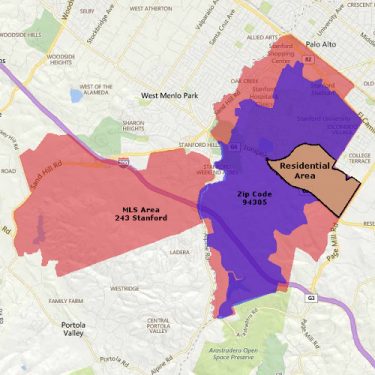 Stanford: Unincorporated But Not Unaffiliated

Stanford isn’t like other unincorporated county pockets. Going back to the founding of the university, the Stanfords wanted to guaranty their schools land endowment in perpetuity. They ensured that no Stanford land could ever be sold.

But, you might say, homes in Stanford are being bought and sold! How can that be? Well, those properties still  belong to Stanford. As far as I can tell, all of Stanford is entirely controlled by the university. So if you find a Stanford listing on the MLS, you will see a note in the description along the lines of, “available to qualified Stanford faculty or staff only.” This tells us the property is subject to the Stanford Residential Ground Lease Program. Ultimately, Stanford will always own this land, but through the Ground Lease Program approved members of it’s faculty and staff can purchase and hold a leasehold ownership interest. Read more about the lease terms and restrictions on Stanford’s Residential Ground Lease brochure. So Stanford’s residential neighborhood is only available to a very select community, and homeowners do not hold the same type of ownership that is usually exchanged when buying or selling real estate.

The Stanfords’ land endowment does not mean that all of Stanford University and it’s affiliated institutions are on unincorporated Stanford land, however. Parts of the campus, in particular the newer developments, such as the Medical Center and Stanford Shopping Center, are incorporated into the neighboring cities. The Medical Center, golf course, and the Stanford Shopping Center are in the City of Palo Alto, but border Stanford so it doesn’t make much of a difference to those who live or work in the neighborhood. Where this does make a difference is in areas like Stanford Creek & Stanford Hills, Stanford-owned subdivisions in Menlo Park which are also subject to a Ground Lease program.

While you might need to be Stanford University affiliated to buy in unincorporated Stanford or on Stanford land, many of the surrounding neighborhoods in Palo Alto, Menlo Park, Portola Valley, Los Altos, Los Altos Hills, enjoy similar vistas, amenities, and access to many of Stanford University’s amenities as a member of the public. That makes these areas highly desirable.

So what are the perks of living in or around Stanford?

Well, for one, it’s gorgeous. Residential streets curve through the foothills past lush yards and street trees. Homes in Stanford are well kept, but with personality, featuring a wide variety of architectural styles and eras. The grassy meadows and oak groves on the hilltops of the Stanford foothills, and Open Space forested mountains of the Santa Cruz range rise behind the neighborhood to the west. And from the trails and some of the higher spots in the neighborhood, such as near Lathrop Park, you might catch a view of the San Francisco Bay and the East Bay.

Another perk is the close vicinity to shopping and dining, from the luxuries of Stanford Shopping Center to the budget favorite, IKEA. Downtown Palo Alto is nearby with more shopping and plenty of fantastic restaurants and coffee shops. There are plenty of dining locations, and plenty of coffee-stops, on campus as well as a copy and print shop and a post office. For groceries, there are plenty of nearby options, including a Safeway, a Whole Foods Market, a Trader Joe’s, the Market at Munger on campus, and the family-owned Bianchini’s Market.

Tired of the hustle and bustle? Look towards the hills for a more rural experience like Webb Ranch, which has a horseback riding school and features two seasonal musts: the October pumpkin patch and later Santa’s Village. (On a side note, Webb Ranch is in Portola Valley, but it is another land lease property owned by Stanford!)

The obvious benefit of living in this area is, of course, Stanford University itself, or more specifically the entertainment on campus. Sports fans can walk to the Big Game at Stanford Stadium, or support other Cardinal teams including fencing, gymnastics, and rowing. Music lovers have ample opportunities to see professional and student performances throughout the year at fantastic venues like the Bing Concert Hall. Enjoy dance and theatrical performances in the black box theater or the Dinkelspiel Auditorium. Visit the Cantor Arts Center to see the special exhibitions and permanent art collections, a global collection of works from classical to contemporary. 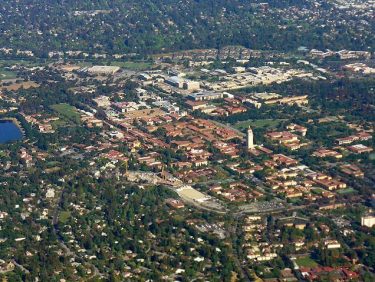 Galleries can be found throughout campus and are not always contained by walls. Two sculpture gardens are permanent art installations within the campus. While you’re outside, consider wandering through the Arboretum or the Arizona Garden. Or walk by historic landmarks such as Hanna House by Frank Lloyd Wright and the Lou Henry Hoover House, the official home of the president of Stanford and former home of President Herbert Hoover. Four dedicated neighborhood parks are placed throughout the residential area.

Since Stanford residents must be Stanford University affiliated, that means homeowners likely have access to a plethora of excellent libraries on-campus and various other university amenities. And can walk or bike to work.

Leave the campuses and there’s still plenty to do. Portola Valley has ample resources for horseback riding. Walk to the Stanford Golf Course or Driving Range, or tee off at the bayshore at the Palo Alto Golf Course. Go a little farther to hike in one of the Midpeninsula Regional Open Space Preserves, or along one of the bayfront parks and wildlife preserves. Looking for a different escape? Walk over to Caltrain to zip up to San Francisco for the day.

Perhaps the best part is the walkability of it. If you have ever driven to the Stanford Medical Center, you’ll know that Stanford’s campuses are not always driver-friendly. Stanford residents can walk or bike across campus, or make use of the campus shuttle services and public transportation options. Of course it’s not just quantity of nearby services, but quality that makes Stanford and neighboring areas so desirable. Stanford’s hospital facilities are known for high level services with a broad range of qualified specialists you wont find anywhere else in the Bay Area. Stanford homes are also within the sought-after Palo Alto Unified School District, and there are plenty of good private schools in the surrounding cities.

Whether you live in the area or are visiting, the residential neighborhood of Stanford is certainly an interesting place to explore. Consider taking a walking tour of some of the neighborhoods and homes of Palo Alto and Stanford with Palo Alto Stanford Heritage. Stanford’s Historical Society has a collection of resources for avid learners. Why not visit the top attractions or take a specialty tour on campus?

Interested in living near Stanford? Learn more about the real estate in a few of the nearby areas such as Palo Alto, Menlo Park, and Portola Valley. Explore more areas through this blog, or reach out to me to learn more!

Stanford Real Estate for sale, pending, and sold within the last 12 months.