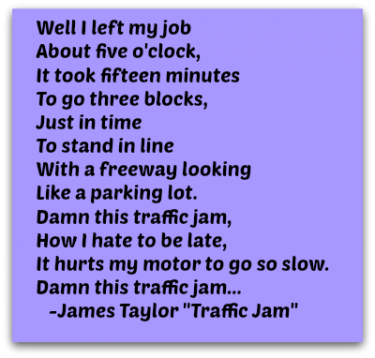 Silicon Valley has many, many positives and only a few negatives. Among those less-than-desirable aspects are the high cost of housing, the urban sprawl, and the inevitable traffic.

Most Silicon Valley home buyers want a commute of 30 minutes or less.  Due to the high cost of residential real estate, though, the majority of home buyers end up living much further from their work places than they’d like.

Here are a few tidbits for understanding the freeway and road traffic patterns in Santa Clara County, San Mateo County, and the Peninsula / South Bay Area as a whole:

One last comment for those who fear congested roads:  the areas closest to the major high tech work places (Palo Alto, Menlo Park, Sunnyvale, Los Altos, Cupertino) have the priciest real estate.  You know it’s bad before you even begin to house-hunt, but you don’t really know until you are in the thick of real estate negotiations.  Many homes in these highly in-demand regions are selling well over list price, in some cases, as much as 25-30% over list price.  (It’s not for the faint of heart.) But be strong: many employees, especially at Google and Apple, have buses where you can have a nearly stress-free commute.  It won’t be short, but you won’t have your hands locked to the steering wheel, either!